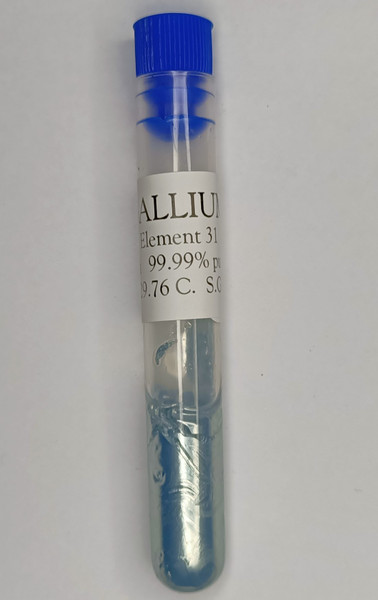 Gallium metal, 10 gram sample in a plastic test tube.  This is ultra pure metallic Gallium, an amazing metal with a melting point so low it can melt in your hand!

Gallium can be used for making several very low melting point alloys, some as low as -18 degrees Celsius using Tin and Indium! It is used as a non-toxic mercury alternative in some applications. You get a plastic test tube (83x12mm including lid) containing just over 10 grams of pure Gallium.

To use your Gallium we find it easy to put the tube in it's supplied ziplock plastic bag and put it into warm water, hot bath sort of temperature. The Gallium will melt and can be poured out or sucked up with a small syringe for ease of dispensing, if it gets blocked up with crystallized Ga simply dip into hot water to melt it again.

The video below shows several of these Gallium tubes.  One of these shows a very unusual supercooling effect, rarely seen in these.

A note on handling Gallium, it is considered non toxic we strongly recommend using gloves and safety glasses. Gallium is corrosive to metals and will cause serious damage to Aluminium, look up videos of Ga versus Al cans, a fun experiment but not what you want on your window frames or aircraft airframe! This stuff will make a mighty big mess on a lot of surfaces too, it breaks up into tiny droplets like mercury but sticks tenaciously to almost everything, it will end up being a grey stain on your bench etc if not careful. It can also wet glass and ceramics and be remarkably hard to get off.

To clean up it is best to cool it and pick up the solid metal without smearing it on surfaces, to clean up spills of liquid use damp paper towelling. Be aware gallium will destroy aluminium items.

Please note this product can only be shipped by road within Australia, no express postage and no international orders unless shipped by sea. These are sealed and packed in crush and leak proof packaging with a drop of paraffin oil in the tube to help prevent it sticking to the inside.